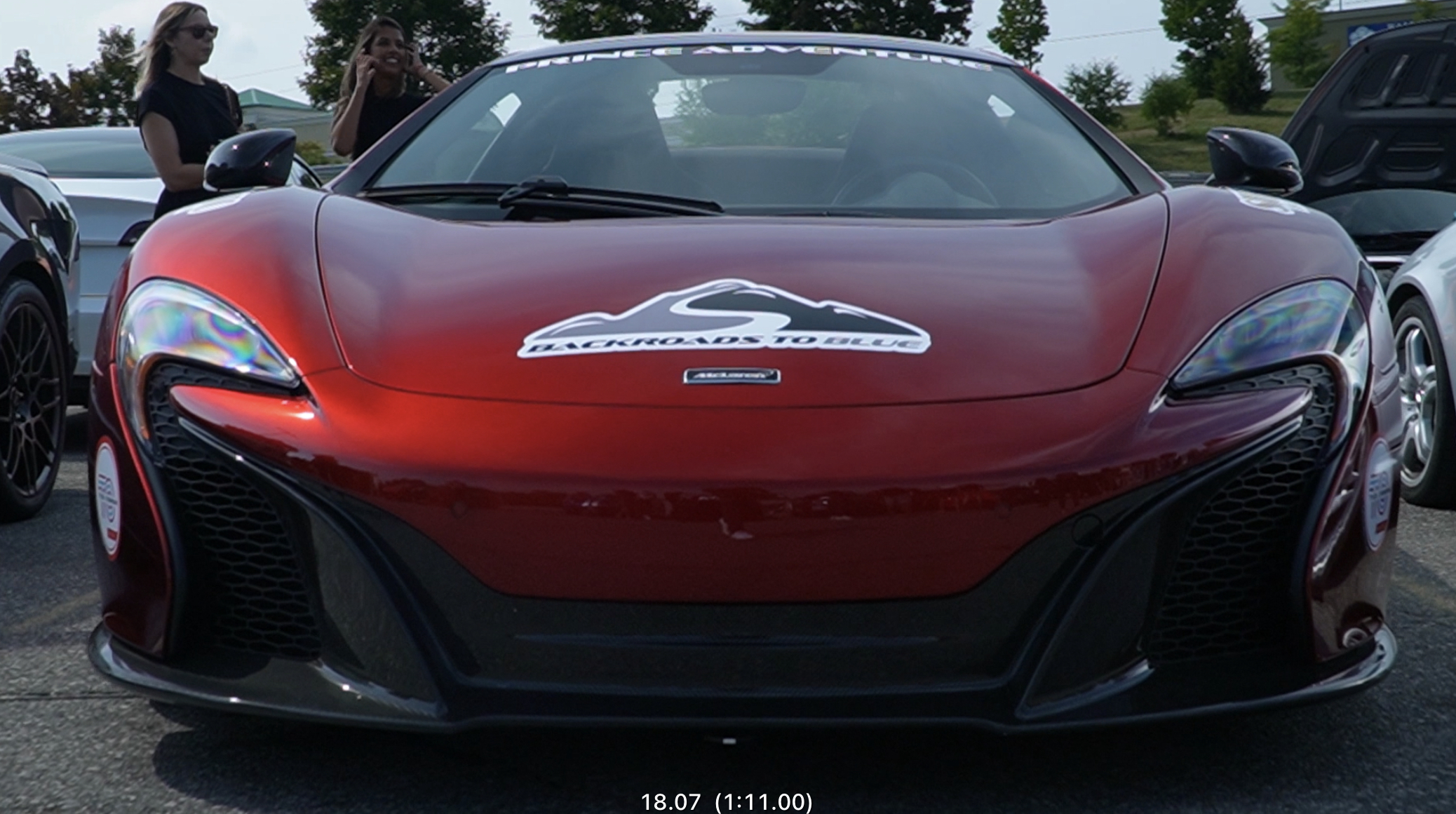 Backroads To Blue 2022 With Prince Adventures 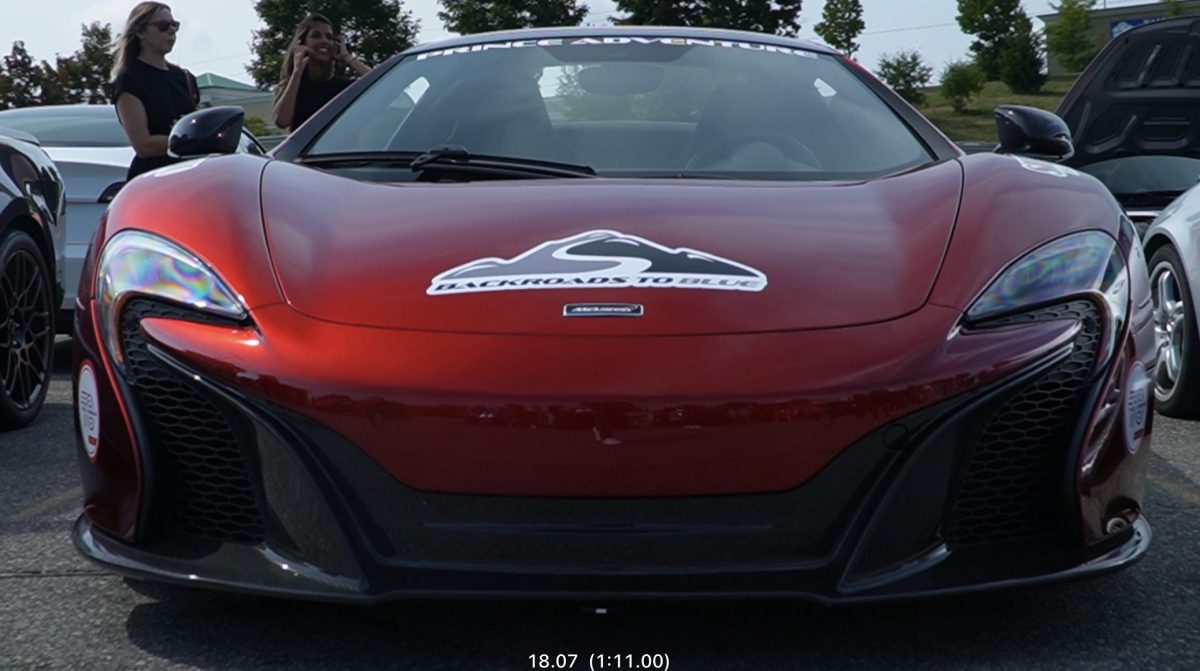 Backroads to Blue 2022 With Prince Adventures

Heliboarding? World Cup in Qatar? Supercar cruising in Ontarios backroads? Check, check, check, please and thank you. We hooked up with Prince Adventures for the annual Backroads to Blue supercar cruise and it didn’t disappoint.

Car meets and cruises usually have the respectable members leave early so the youth and careless can hoon about until the fuzz shuts the party down. What if your Friday night Tim Hortons hangout/cruise wasn’t patrolled by every Hyundai Genesis with a cat delete, or dually with something to prove? Is an off camber corner with sloping hills and winding ribbons of uninterrupted tarmac too much to ask for? Prince Adventures doesn’t seem to think so.

The annual Backroads-to-Blue Waterloo-to-Collingwood jaunt in the woods takes place on a warm Friday afternoon. 40+ super and sports cars cast their shadow on an unassuming Canadian Tire parking lot at 1pm. With traffic coming to a halt around us we sticker and saddle up. Go Pros mounted. Gas tank full. Extra gallon of oil in the trunk. We packed up and headed out onto the main road in front of a lineup of cell phones chasing the two groups of drivers. 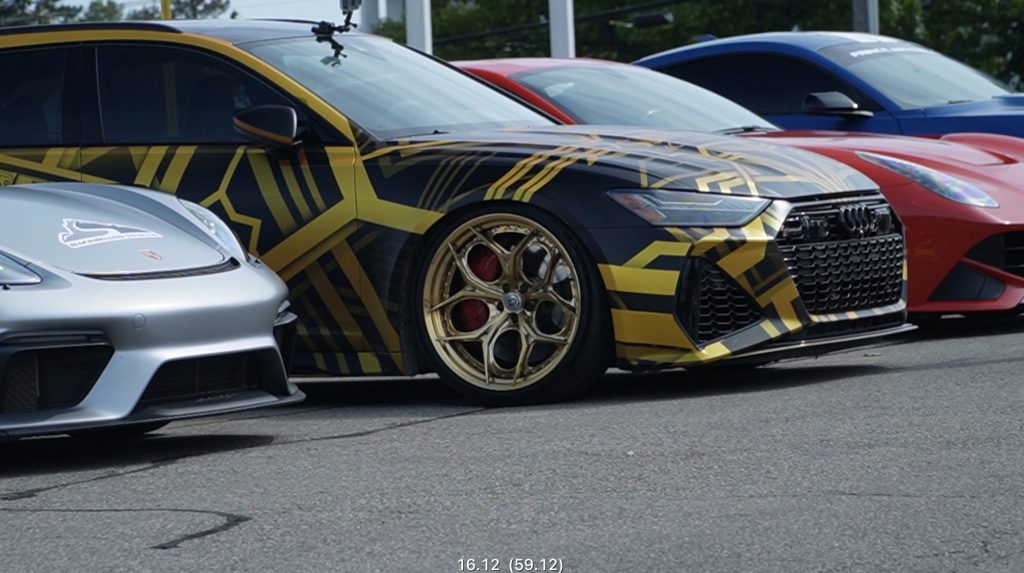 After 15 minutes slicing through traffic at safe speeds we were in the country. The open roads and skies blessed our drive with perfect conditions. I would have never thought that Waterloo-to-Collingwood could be a fun drive. I truly believed it would be flat like most of the surrounding area in south central Ontario. Though I wasn’t entirely wrong I was thoroughly surprised with some of the roads we found. Porsches glued to my trunk in every turn. Lambos and Mclarens escaping me in every straight away. I was lucky to have put on a set of extra sticky summer tires this year. I managed to pedal my—by comparison—low level C55 AMG hard enough to impress a 560S or two. Bothered a Camaro or Mustang as they couldn’t quite escape me on every strait. And though I wasn’t fast enough to keep up with the serious cars, RS6, Viper, and their company, I believe we all still had a great time. 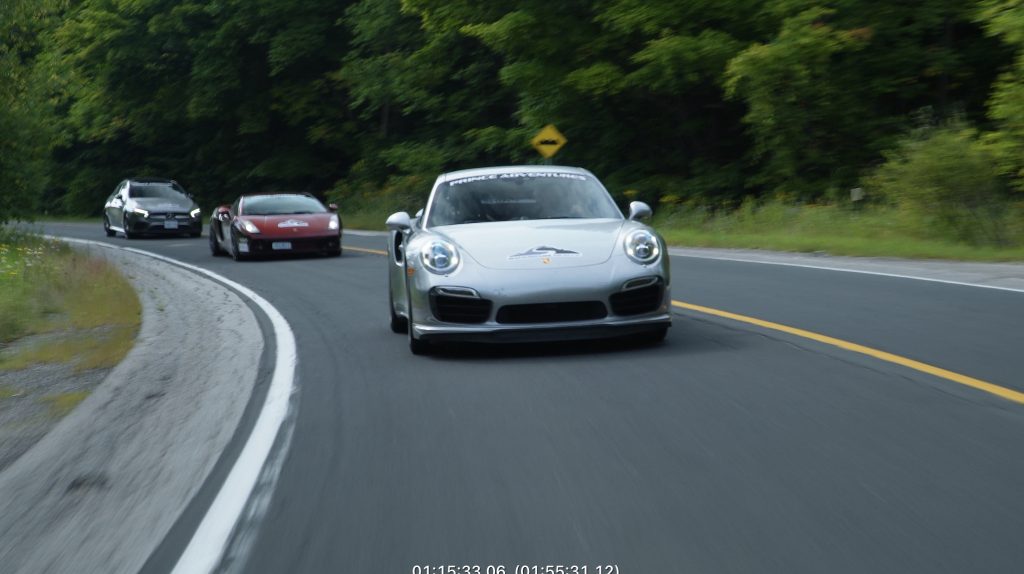 We descend upon Blue Mountain ahead of schedule. Nothing beats the view when you come through the bands of trees, rays of sun bathing the valley beneath the mountain, and the lake in the close distance. After we parking we noticed we had picked up a few extra cars along the way. Enthusiasts wanting to share in the experience with us. An R32 peeled out shortly after flagging a peace sign. The owner showing his appreciation for rolling hard with us. We were fortunate enough to have a visit from local law enforcement to remind us how to drive safely. Thanks to the boys-in-blue for having our backs and for all of their service. 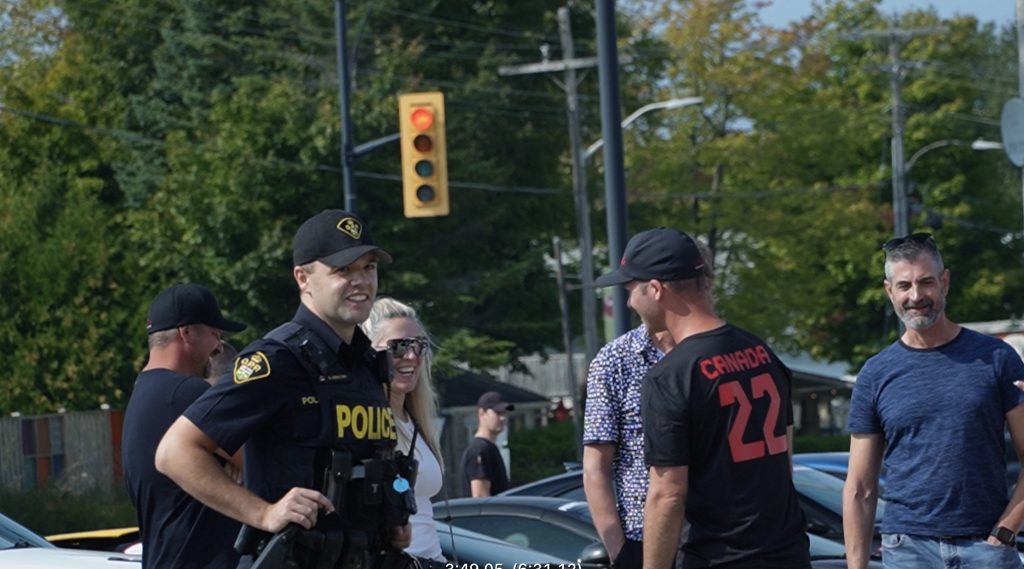 Prince Adventures is for the enthusiast who wants to go at their own pace with a group of skilled drivers. The point is not to turn the 2 hour cruise into a time attack session. No one is setting lap records. This group of mature-by their age and state of mind-drivers push their cars as far as they are comfortable without being a menace to society. Safety and comfortable pacing is encouraged with this group of gear-heads. After all, you can’t go very fast behind bars, so why push your luck?

Day one ended with a jam packed dinner in the Blue Mountain village, then late to bed. Day two was a groggy start for some but we were all accounted for as the tour left on time to our next destination. The Prince Adventures team carefully planned every route and destination. We were all grouped together for a slow ride north to Sauble Beach. 40+ rev happy rockstar cars flooded an empty parking lot and the town fell over itself with anticipation to see what the fuss was about. Every Nona in the neighbourhood dropped their spaghetti to see the Lamborghinis. The youth eyes shot out of their faces for Mclarens, Astons, and Porsche poster cars. One teen nearly broke a high E sharp when he heard the RS6 Avant has 800hp.

The cruise continued after lunch with more safe driving and camaraderie. With breaks between drives to shoot the shit about how impressed everyone was with each other’s driving or vehicle performance, it was less a chest beating contest and more of a pat on the back. 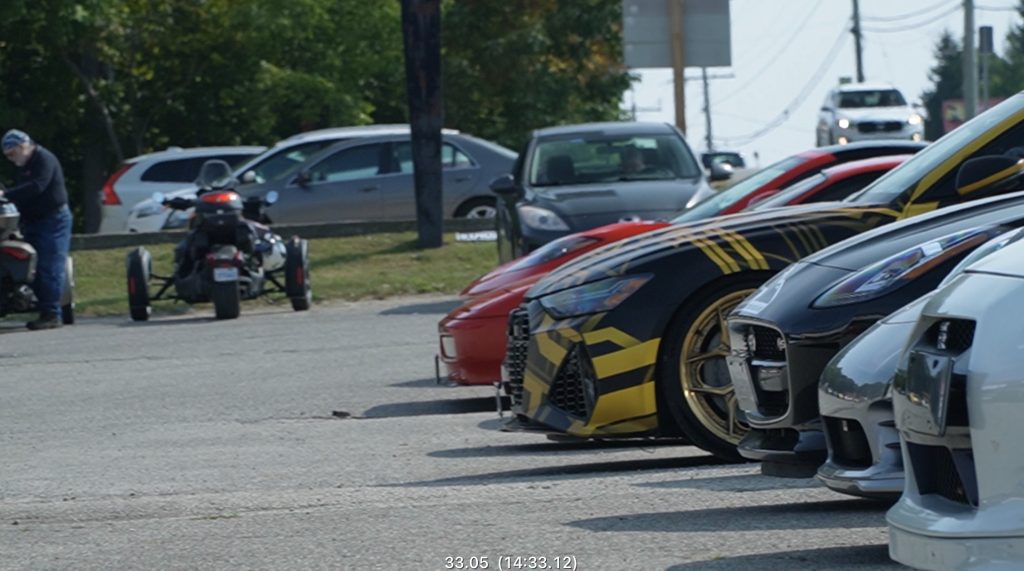 Prince Adventures sets up a few cruises annually to enjoy Ontarios more scenic patches of tarmac. Taking care to book all of the stops, restaurants, hotels, and features for the participants, summer of 2022 has seen Muskoka and Collingwood on the schedule and we can’t wait to join them again for Backroads to Blue ‘23.

Check out Prince Adventures for the coolest car club in Western Ontario as well as custom destination vacations the world over.

Canadian Car culture has long been underground. An off the shoulder scarf in the wind moving quietly at its own accord not bothering anyone, until. Car culture in this country has plenty of small time events that have grown over the years to support the subcultures of mainstream products with attendance in the thousands. There just isn’t anything that compares to the big American or international gatherings which support car culture as a whole. Shows like Pebble Beach, Goodwood festival of Speed, Car Week in California, we just don’t get them at the same scale. Enter DRIVE Festival.

DRIVE Festival is a weekend long celebration of all things automotive. Everyone is represented from muscle and vintage-to-classic and concept, electric and hybrid-to-custom and import. Manufacturers show up to parade this seasons new models along the race track as well as off road. Not just for the licensed driver, but for the whole family, DRIVE Festival 2022 saw attractions for the coming generations of car enthusiasts. 3 axis racing simulators, electric kids ride alongs, electric vintage style motorcycles and even the Dark Knight himself cruised up with his Bat-mobile.

In 2021 DRIVE Festival had more than 17,000 attendees and 2,500 plus test drives on three test tracks all located inside the scenic forestry of Canadian Tire Mosport Racetrack. For its first year those are impressive numbers. Though we haven’t seen the numbers yet, we trust 2022 DRIVE Festival knocked those numbers into space.

Friday was press day. Easy access and very few if any spectators mucking about while vendors set up and glad hand one another. Manufacturers pitch their tents. Pylons quadren off high speed testing zones. The Fleets Coffee truck finally shows up for on-sight latte service we all desperately need to carry the day on. Friday is a relatively easy day for those involved. Sort of a dry run for the chaos Saturday and Sunday can bring with tens of thousands of enthusiasts storming the gates to test drive electric cars, off-road ATV’s, see historic Mclarens bomb up and down the bespoke hill climb from turns 5 up and down through turn 1 of Mostport.

Safe Auto spent the weekend with BMW True North and our corporate partners Collecting Cars Canada. We were cruising the pits, lapping the skid pad with Continental Tire in the C8 Corvette, and bombing up the hill climb in our 800hp Audi RS6. Did you know gold 22”HRE wheels, though heavy, make decent track wheels….at 200+kmh?

Saturday and Sunday the masses roll up to the gates for 10am in massive lineups. Big wing Scion FRS, Ford F-150 Raptor, Hellcats for miles, Honda Civic Type R (what’s a car show without 200 Civics?), and BMW M3s of all vintage rev their engines and bang off the redline as they roll underneath the entrance bridge to the paddock inside the pit lane. 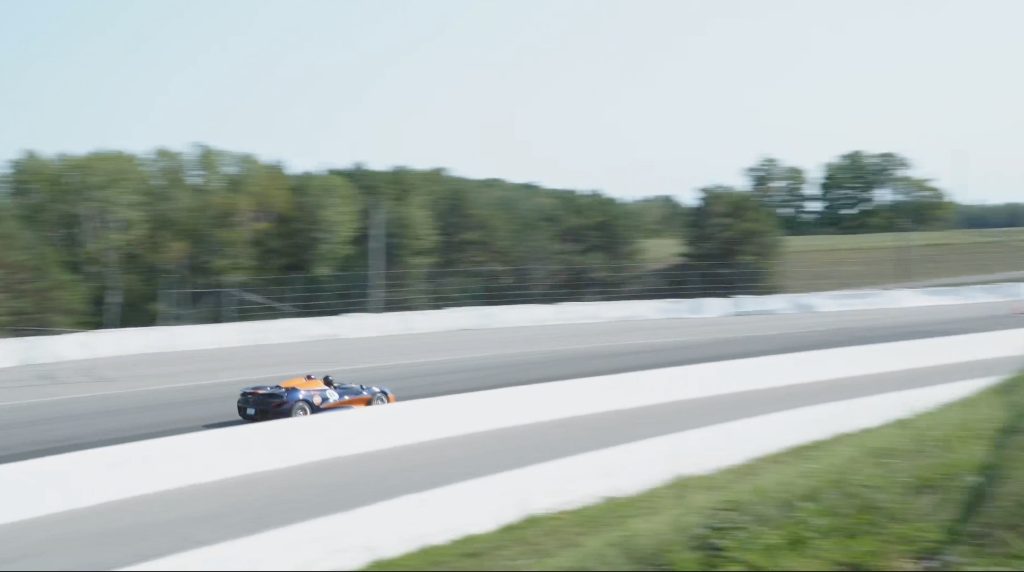 Our experience was likely the best of any vendor or guest alike. We cruised the grounds assisted by a golf kart we stole from our friends Windshield Experts (thanks boys) . We enjoyed Nissan, Toyota, and Hyundai in both off-road excursions through the woods to showcase their new lineups, as well as on the back half of the track with electric vehicle test drives for those signed up. Continental Tire took us for a max attack autocross in the new C8 Corvette. Side note: the C8 Vette is quick so buy plenty of tires. You’ll need them. We enjoyed turning our 1000hp Audi RS6 into a hill climb monster. Though its almost 5000lbs, it outpaced more than a few track built vehicle and kept respectable time in the corners. Did you know gold 22”HRE wheels, though heavy, make decent track wheels….at 200+kmh? A few laps were turned out with our camera car setting itself up in front and behind the all new Nissan “Z” pace-car to grab footage for the event.

All-in-all we had an amazing weekend at Canadas largest and fastest racetrack. If you haven’t had a chance to experience supercars, muscle cars, JDM hero’s, off-road monsters, and everything in between we suggest you keep your September weekends open for 2023 as DRIVE Festival is likely to have something for everyone. Canada has a new mainstream attraction for car culture with DRIVE Festival. 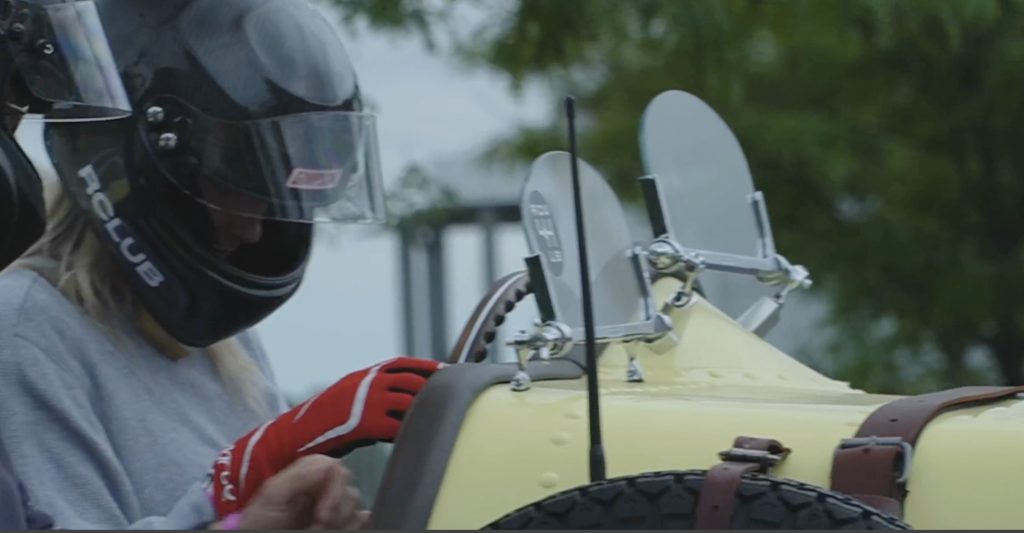